The IBM S/360 computers was the first family of computers could complete both scientific and commercial applications. It was released in 1964, and could complete 34,500 instructions per second. This is an image of a woman sitting at a printing apparatus with IBM 360 (specifically Model 40) in the background.

For more information regarding the IBM System 360, visit the IBM 100 page.

“Dumb terminals” were a series of computers that allowed many people to use the mainframe at the same time. The image below shows a group of women using these IBM computers to manage airline reservations in a timeshare environment.

Photo courtesy of IBM archives. For additional information regarding the history

of women at IBM, click the Archives link to be redirected.

This is another image of both women and men using the SABRE Reservations System. It is interesting to note that a version of the SABRE system is still used to book airline reservations today. 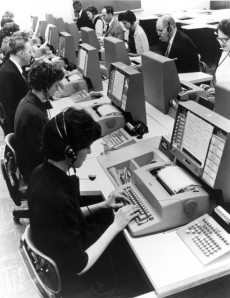 For more information on the history and usage of SABRE Airline Reservation Systems, please read the original CBT article.

The 1971 DEC Resource Timesharing System (RSTS) was a software system designed to allow multiple users to interact with a DEC PDP-11 minicomputer (shown below). The artwork here shows a woman inserting a disk pack into the computer while the man is sitting at a DEC terminal/typewriter (and known as a DECWriter).

For more information on the early history of women and computing, please visit

When you think of the United States and the 1960’s, one image that comes to mind is NASA and the space race. However, people commonly overlook the Lovelace Woman in Space program that established in 1960. Co-created by Brigadier General Donald Flickinger and Dr. W. Randolph Lovelace, the WISP was designed from a practical, engineering point of view, which theorized that women ought to be trained for space expeditions due to lower their body weights and oxygen requirements.

Below is a picture of Geraldine “Jerrie” Cobb beside a Mercury capsule.

Photo courtesy of NASA. For additional information about

A primary source of storing data at the time was “punching” the information onto cards. This was considered clerical work, and a keypunching operator position was a common job for women in the 1960s.  Here a woman is shown punching data onto cards.

For more photos and details on the evolution of the punch card and the people who worked these computers see the The Punch Card’s Pedigree page.

Advancements in technology during this time helped make things such as air travel more efficient. SABRE, one of the most widely publicized and influential computerized reservation systems, was co-produced by American Airlines and IBM. It was used starting in 1964, and it was often operated by women as shown in the picture below.

To read more about SABRE and its role as technology, see the Mainframes in Daily Life page.

Programming for new computers was a slow and tedious process. This was aided by tools such as the flowchart template seen below, which helped make writing a large program simpler.  The image below shows an IBM programmer mapping out instructions using the flowchart template to display a logical flow of the program.

For more information about the progression of programming in time, see this Higher Level Languages page.

Women around the world were involved with technology: the picture below shows a woman working at TeleMisr, an Egyptian state owned television set manufacturing plant. In this plant, nearly half of the six hundred employees were women.

To find out more about labor culture and history through time, see the Rutgers University library page for an index of sources.

The role of the female typist, sometimes called a “girl operator” in technology was seen as clerical work and not a part of the “higher” thinking jobs in tech. Here these advertisements depict the computers as being simple enough for a mundane person to use by showcasing a typist as the main user. Although women in these roles usually did much more than secretarial work, and were mostly immersed in the technology that they used, they were not recognized for being technologically literate. They were most likely stuck in the preconceived notions of basic clerical work.

For more on the history of women in computing in Britain between 1950-1970, see Marie Hicks’ blog.