The films produced today tend to provide inaccurate portrayals of pretty much everything, including people. The problem is that viewers, especially young girls, don’t differentiate between what is shown on screen and real life, which affects their worldview and self-image. A study cited by WebMD found that TV shows focused on appearance are impacting the self esteem of girls as young as five (Heubert, 2006). Changes must be made behind the scenes to change what’s appearing on the screen. Although women purchase half of all movie tickets sold in the U.S., the creators of movies are most likely to be men who thus control what viewers watch (Zurko, 2013). Underrepresentation of women in the film industry is a problem because it results in excessively biased films, harming those who don’t separate media from reality.

Ideally, the solution to this problem would diminish all inequalities between men and women on screen, thus eradicating misconceptions of women that stem from their portrayal on film. This optimistic outcome would be the result of an even amount of men and women working in the film industry in jobs at entry level and executive positions and everything in between. Ultimately an even distribution would lead to more diverse decision-making teams that would work toward producing movies that focus on character development rather than their physical appearance. As Tiffany Lathe, vice president for human resources and legal at Rackspace has said, “a more diverse workforce is better for business” (Trapp, 2014). After all, film viewers come from different backgrounds—why don’t the producers? A more realistic outcome is that the culture of the film industry would become more supportive toward women in ways that encourage more women to join and take part in roles that have direct a direct impact on film content.

I propose a three stage solution called FFF, or Furthering Females in Filmmaking, created for women and designed to cultivate, foster, and apply an interest in filmmaking careers and general knowledge about the industry. Although each stage builds atop the previous one, it would be possible for a female to jump in at the stage most appropriate to her age level. The program would take place as an after-school extra-curricular activity run by volunteers who are passionate about the cause. I think that this solution would be most effective in a city with an abundance of resources and interest in the filmmaking industry such as Los Angeles or New York City. Therefore, the program would originate in one of these cities, but would be open to growth depending on its success.

The first stage has two objectives: to introduce filmmaking roles and to open dialogue about female representation in the media. Stage one of FFF would include open discussions about how women in their lives, such as mothers and teachers, differ from women they see on the screen and in advertisements. This topic is included in stage one because it’s important to distinguish media from reality and the earlier this recognition can be instilled, the better. Also, this stage would introduce filmmaking by taking a closer look at kids’ favorite films such as Frozen or How to Train Your Dragon. Girls in FFF would learn about the roles of a director, editor, producer, and screenwriter through the context of familiar films. Through interactive games and activities, they would try out different roles and realize their responsibility of controlling the final product. Stacey K. Black, hairstylist and partial director on TNT’s Major Crimes, thinks women are underrepresented in the film industry “because they are used as currency in advertising…if women were in charge of more content in the film and TV industry, I feel like we would be less of a commodity” (Black, 2014). Stage one aims to tackle her point by showing girls that females are not currency and that they are capable of executing film-making jobs.

The second stage of FFF would take effect once girls have grown out of the first stage, which would begin at middle school and last until the end of high school. This stage would further develop conversations about representation of women in addition to teaching girls more technical skills involved in filmmaking. At this point teachers from stage one would no longer be sufficient for educating the girls in FFF. Industry professionals inspired by FFF’s cause would be brought in to mentor girls in stage two. Girls would gain valuable knowldge from their technical expertise and industry experience, so whether the mentor is a male or female is not very important. As Maria Klawe from Harvey Mudd mentioned in her presentation, a mentor’s gender is not as important so long as they are a helpful resource and support their pupil’s endeavors. These professionals would use their expertise to teach girls filmmaking skills such as creating storyboards, writing scripts, editing sound clips, and so forth. Kendall Sherwood, writer on Major Crimes, said that “men are raised to think they have certain skills that make them more valuable and—in an industry that takes itself pretty seriously—executives may assume they can only find those skills in men” (Sherwood, 2014). Stage two takes on Sherwood’s point by educating girls in filmmaking skills to give them the confidence they need to compete with men that with high self-esteem.

The third and final stage of FFF is designated for women who are serious about filmmaking as a career. High school students interested in this career path would transition to stage three to learn about higher education in filmmaking. This stage would also attract those seeking internships and jobs in the industry. This stage would not only include young women seeking resources, but it would also include female professionals in the industry (who may or may not be mentors in stage two) that would use FFF to network amongst themselves. They could use the program as a way to recruit women looking to get into the film business, such as those who graduated from stage three. Female film professionals could also use stage three of FFF as a support group in which they share advice about how they balance their career with their personal life, thus encouraging women to stay in the industry. Leah Breuer, assistant editor for Major Crimes, believes that filmmaking’s gender gap is due to the pull toward family life. In an interview she stated, “This is an industry that requires so much of our time that it may be a turnoff for some women who want to raise a family” (Breuer, 2014). By exchanging tips and stories of how they have been able to make their careers harmonize with their family lives, women will be able to overcome this turnoff. This final stage serves as a lasting resource for all women involved in the industry, so they are welcome to stay in stage three for as long as they choose. Every woman has something valuable to offer and something to learn—in this way, FFF benefits women looking to get into the industry, women looking to recruit others into the industry, and society as a whole that’s sick of the trend of films today.

To be perfectly honest, prior to this assignment I was scared of coding. Despite the fact that speakers have been saying that anyone can code and that it’s something that can be picked up even after college, I just couldn’t get past the fact that elaborate websites could be based on something simple. I was expecting to struggle through this assignment and probably end up Googling how to do certain coding tasks along the way. My pessimistic attitude toward coding results from the fact that I have never had any interaction with coding until this tutorial. In fact, until this semester, all my years of education have never covered this topic. Therefore this unfamiliar language that serves as the basis of every website I’ve ever visited was a bit intimidating to say the least.

To my surprise, Code Academy’s interface and step-by-step breakdown of instructions, was very easy to follow and I was able to finish over a full hour of stress-free coding without having to consult outside sources for help! The tutorial was effective because it left no room for failure since every single step was spelled out thoroughly and generous hints were provided. I found irony in this since a few speakers talked positively about failure as a motivator and a necessary process toward success. I’ve always preferred to be successful without prior failure, so I appreciated the success-oriented steps in the tutorial. However I’m sure that in more complex coding applications, failure would be pretty much inevitable.

I would definitely consider completing more of this tutorial on HTML& CSS or even trying other coding languages. This kind of valuable information is being taught in classes that people pay money for. The fact that Code Academy offers it for free is wonderful and I would encourage anyone interested to take advantage of it. I believe that novices to coding should definitely start with online tutorials like Code Academy, which offers the perfect balance of hands-on learning and hand-holding, resulting in an enlightened mind that is open to the many possibilities of coding.

This image shows the final step in HTML Basics, which is the last section I completed in the tutorial. In this step I used code to add and image, a hyperlink, and a hyperlink that was coded as an image. 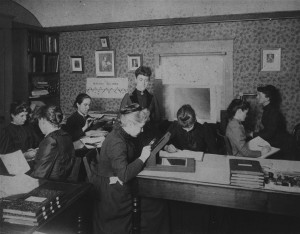 From 1877 to 1919, the Harvard Observatory hired women as “human computers” to process astronomical data. Despite their college degrees, they earned wages similar to those of an unskilled worker.

To view this photo in context and to read more about these “human computers,” see this Smithsonian article about the Harvard Observatory in the start of the 20th century.

This photo comes from Harvard University and is titled “Astronomer Edward Charles Pickering’s Harvard computers” and is authored by the Harvard College Observatory. It can be found in the Wikimedia Commons and is now in the public domain because it was published before January 1st, 1923.

In November 1903 Mary Anderson, pictured above with her patent drawing, was granted a patent for an automatic car window cleaning device that is now known as the windshield wiper.

To view the photo in context and for additional reading about Mary’s invention, see this story about Anderson’s invention, which was posted on the U.S. Patent and Trademark Office’s website.

The photo pictured above was posted to the U.S. Patent and Trademark Office in the article from the above link by Dennis Forbes. Further information is unknown.

Many women in the early 20th century interacted with technology while working in crowded factories. Such women are pictured above using machines to assemble locks and drills in an Ohio factory in 1902.

For additional reading about women at work in the 1900s, check out this timeline from the Discovery Education.

This photo is possession of the Detroit Photographic Company and was taken by William H. Jackson in 1902. The ID number in DPC’s archive is 04756.

After working in the Columbia Paper Bag Company in New England, Margaret Knight invented machinery that would do a better job of folding the bottom of square paper bags. She went on to invent other devices, all patented between 1902 and 1915.

The illustration above shows the patent design for her paper bag machine. The graphic can be found on a website sponsored by CSU Pomona. All other information about the image is unknown.

To read more on women’s technological growth in the workplace, see Christine Bose’s book, Women in 1900: Gateway to the Political Economy of the 20th Century.

The photo above was taken between 1900 and 1915 of telephone operators in Baker City, OR. It is owned by the Oregon Historical Society. Its catalog number is OrHi75739.